Wayward Artists and the Trip to Napa

In September, Kate and I traveled by car from Seattle to Napa , California. Along the way I made art, gathered materials and explored new ideas.   Kate is pregnant so this trip was a way for us to spend quality time together for nearly two whole weeks!
After quick stops in Portland and Oakland , Oregon we headed west to the California coast.We spent a few days in North Humboldt County before we headed to Napa. Some friends of ours allowed us to use their fire pit to fire pottery and to set up a temporary studio.  We painted images inspired by the farms and forests nearby. 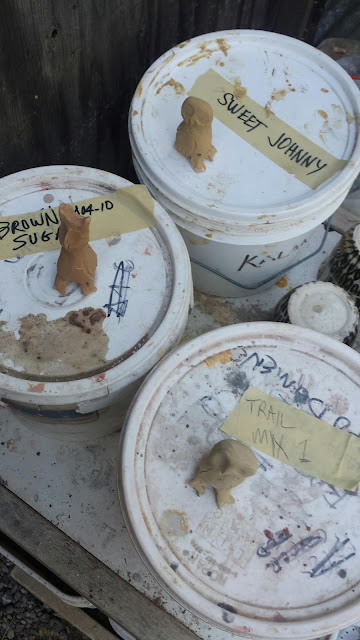 These are the glazes I came up with using the found clays. I recently fired them to cone 10 which ranged from beige to brown.  I added wood ash from the fire pit to give them some gloss.

Posted by Aaron Murray Arts and Crafts at 12:40 PM No comments:

The Wonderful Wizard of Odd

The Wonderful Wizard of Odd is my latest installation of sculptures for the final NEPO 5k 2015 an event on Saturday August 29th from 12 to 5 pm that stretches from Hing Hay Park in the International District to the NEPO house on Beacon Hill.  Fortunately, for the second year running I was able to install my art in the forest at Lewis Park.   Despite intermittent rain showers and violent gusts of wind which included the felling of a large tree at just around 12, the show seemed quite successful as over 300 people trudged through the forest to see the art. My wife Kate Murray and I passed out over 120 maps that detailed the exhibition with many reused and shared by other patrons. We heard  lots of great commentary and met many friendly people as we pick-nicked next to the main trail.
My installation, the Wonderful Wizard of Odd is loosely based on the book and movie The Wizard of Oz, pop culture, banking, and wizardry. I came up with the idea immediately after the last NEPO in 2014. For this exhibit I created over 200 objects, mostly out of ceramic materials, and used unfired, low fire, mid range and high fire, and Raku methods to finish the work. I also used found materials including stone, bamboo, paper, plastic and metal wire. I  made most of the work in 2 months, with one reused from a previous exhibition (burning bank). 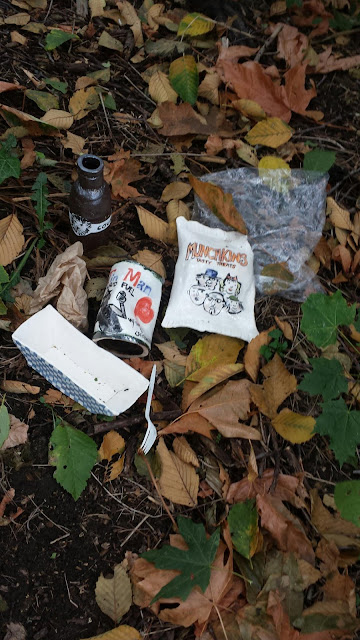 Trash Pile, ceramic can, bottle. Chip bag, and hot dog carrier. Plastic bag and fork, crumpled paper pastry bag. The can features the Tin man and is an energy drink, the beer bottle has the lion and liquid courage, the chip bag is called Munchkins Tasty Treats, and the hot dog carrier has a gingham design in blue, reminiscent of Dorothys dress. 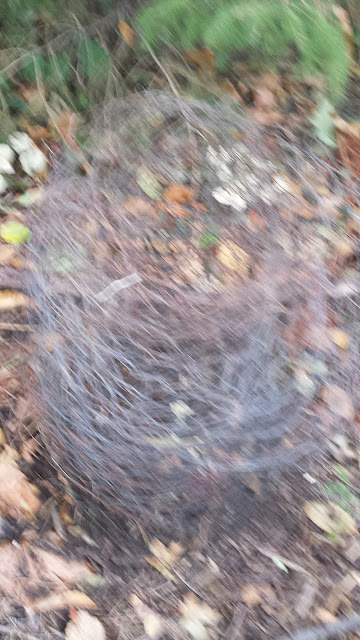 Tornado, spool of wire, ceramic witch and condominium. Despite the blurry photo, the tornado was not spinning. 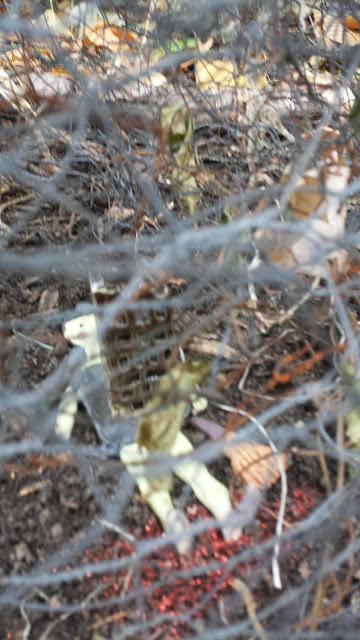 Tornado detail, if you look closely inside the tornado you will find a flattened witch, with a small condominium building on her stomach. The witches toes have red glitter sprinkled on them. 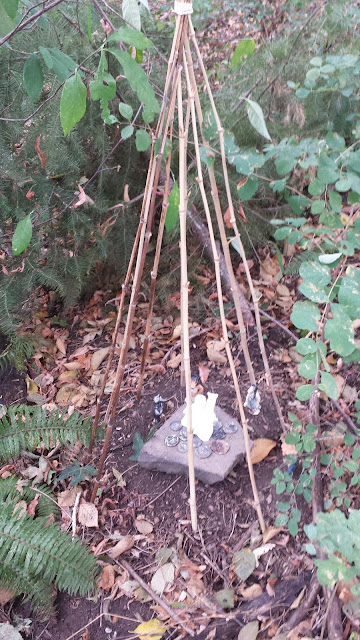 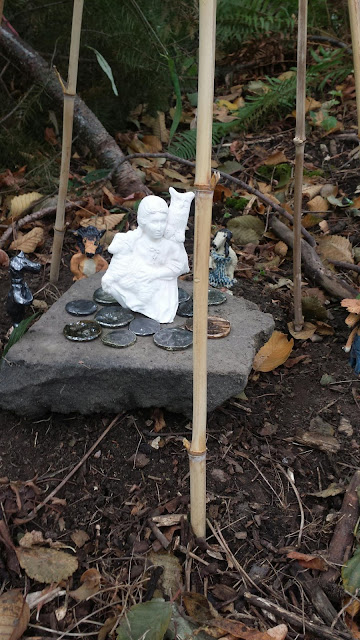 This sculpture features Dorothy, tin man, lion, and scarecrow depicted as sheep. Dorothy is holding her dog Toto. They are visiting a woman holding a lamb with an owl on her shoulder. She appears to have metallic coins (plates?) placed around her.The bamboo is arranged like a cage. As an artist one of the things I like to do is evoke mystery. This is one of those pieces that is open to interpretation. 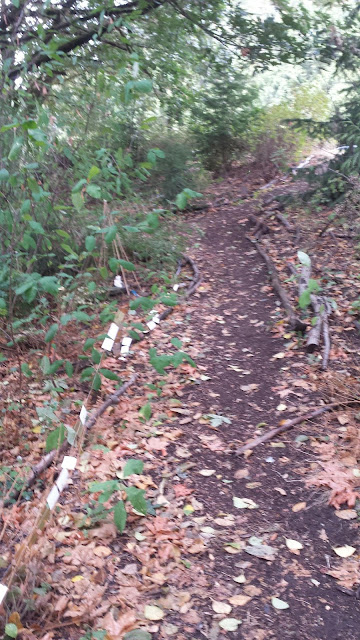 On the trail you can "follow the yellow brick road" . My wife Kate Murray made 120 feet of gold brick garlands for the exhibition to help with the route through the forest. 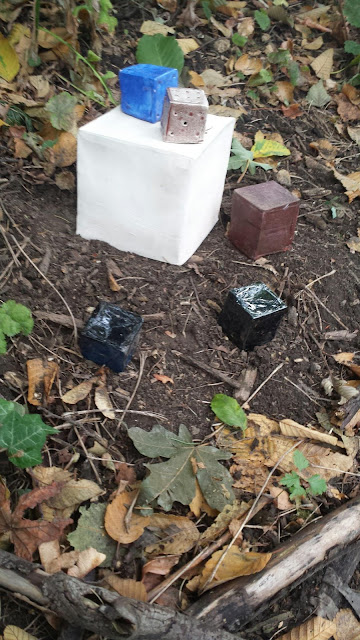 Dice and Cubes, hollow slab built ceramic cubes. The dice are odd numbered, and represent the major political parties in the USA. The other cubes are for thinking outside the box. 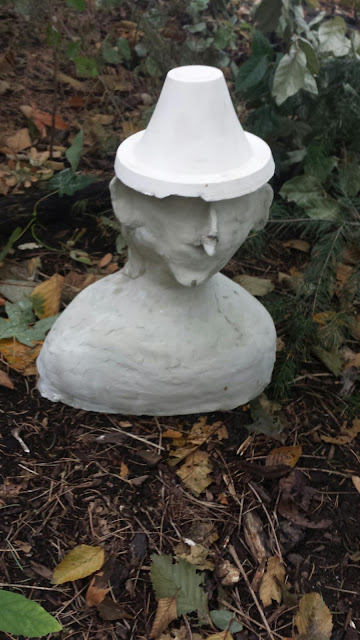 The Wicked Witch, unfired clay , with bisque fired cap. The idea behind this piece was that people could poor water on it and eventually it would dissolve much like the wicked witch in the Wizard of Oz. Since it was supposed to rain all day, I figured it would happen naturally. It didn't.  I should have at least given her a better hat and painted her face green! 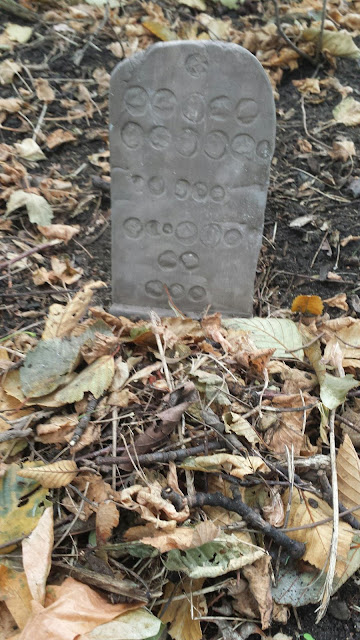 Biography ,black manganese clay, bisque  fired. Stamped in a language created specifically for this exhibition are the words roughly translated as....Aaron Murray is the Wizard of Odd.  This sculpture is placed to resemble a grave marker of sorts. The cryptic language on the tablet is used to make one feel like they are in an unfamiliar culture. 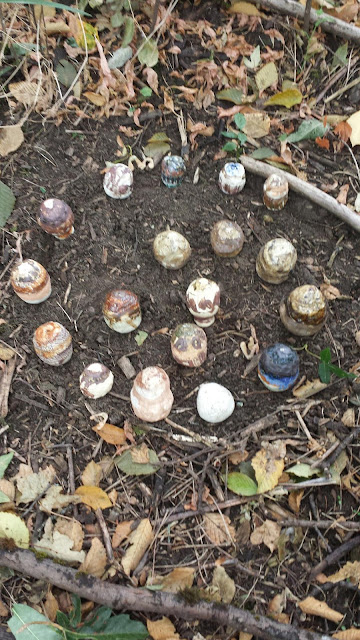 Geodes, hollow pinched formed clay with sea glass and various found objects inside. The idea was to give the geodes to kids so they could Crack them open to see the inside. I ended up busting open a couple, and gave one to a boy that was curious about them. 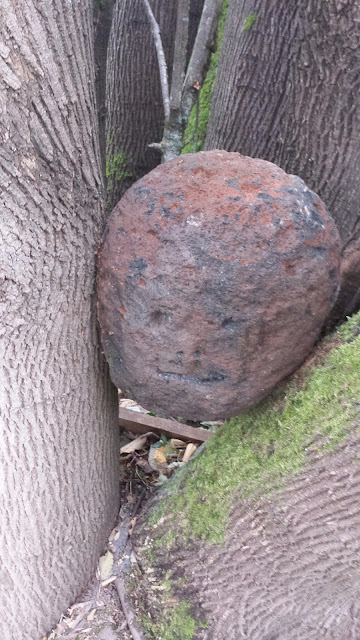 The Wizard of Odd, hollow basalt pumice boulder with walkie-talkie placed inside, and wedged between 2 tree trunks.  This piece was meant to embody the wizards head in the movie about oz. I placed a walkie-talkie inside of the boulder so that I could speak as the wizard from a distance. I would say something like "I am the wizard of odd...ha ha ha" .The boulder, found near a river by Mt. Baker also looks like a baby's head being born between 2 legs. 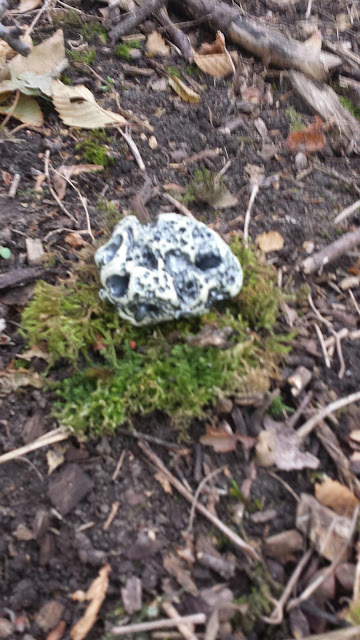 I made a series of oddjects, objects that have no meaning or reference. As the Wizard of Odd, I felt that somehow there had to be some magic involved. The oddjects are magical in that there were created out of thin air with clay, in other words they magically appeared from my imagination through my hands. 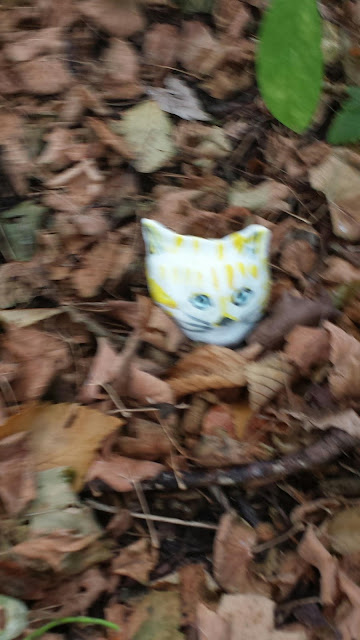 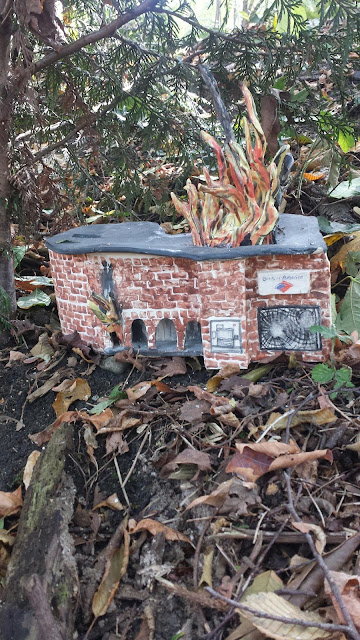 Bank of America,  this sculpture had dried red cedar incense burning between the ceramic flames, which I re-lit throughout the day. It made it look like it was actually burning. The bank is functional, coins can be deposited in the slot on the roof. 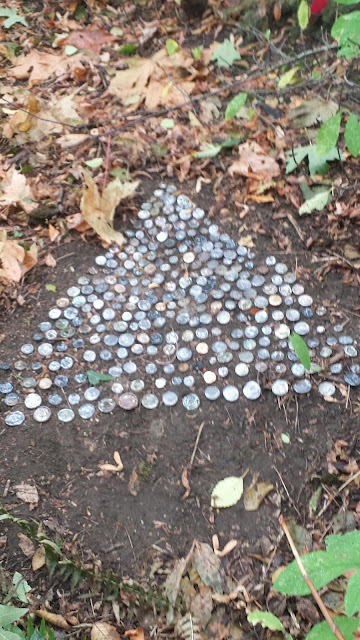 Coinage, ceramic coins made from various clays stamped with custom designs.Glazed with metallic glaze and lusters. These coins are arranged in a 2d pyramid, similar to mosaics. 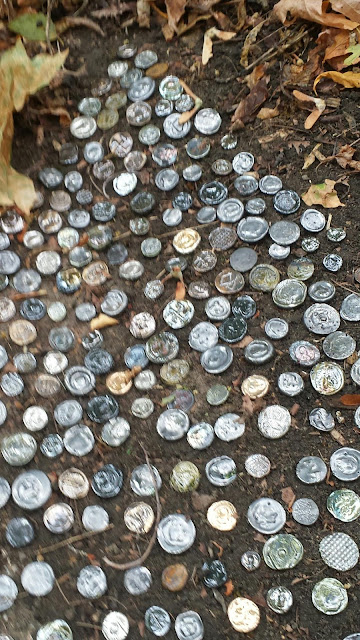 The stamps used for the coins varied from using found objects to using common symbols. Many had stamping created from chipped stones and pebbles found at Alki Beach and elsewhere. The stone printed stamps were also used to create an alphabet for printing onto thick slabs of clay to create a tablet (see Biography above). While creating the coins I thought a lot about language, and how art is language. That led me to create symbols that I could derive easily from pressing the stones into the surface of the clay, that I could then fire to create a stamp. The stamp could then be used to create a reverse image on a "coin". 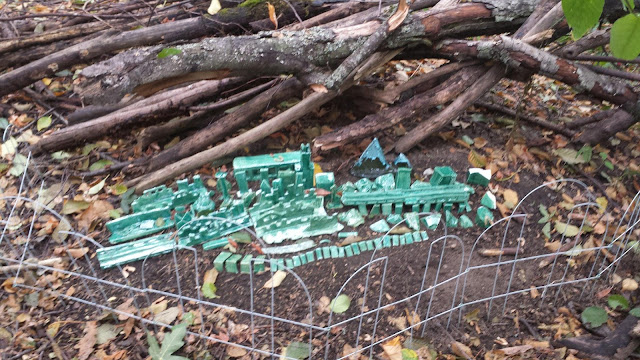 The Emerald City. Since the Emerald City is also a name for Seattle I made a representation of it from a waterfront view. I wanted to also make the ferris wheel but I ran out of time. 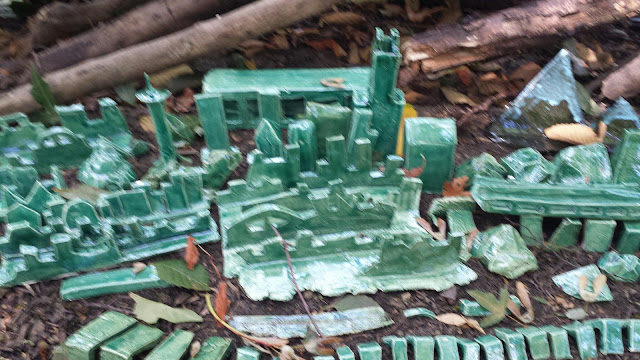 Emerald City detail, earthenware and porcelain with low fire glaze. The cityscape is made of slabs, extrusions, and carved clays. 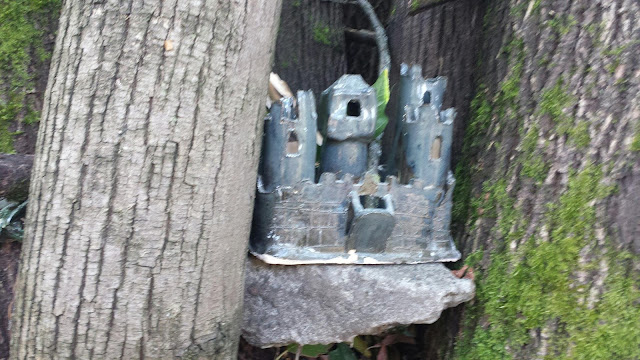 Witch's Castle, Vashon white clay, blue grey mottled glaze. I mounted this castle on a found piece of cement that wedged between two tree boughs. The flying monkeys (below) were positioned at the base of the tree. 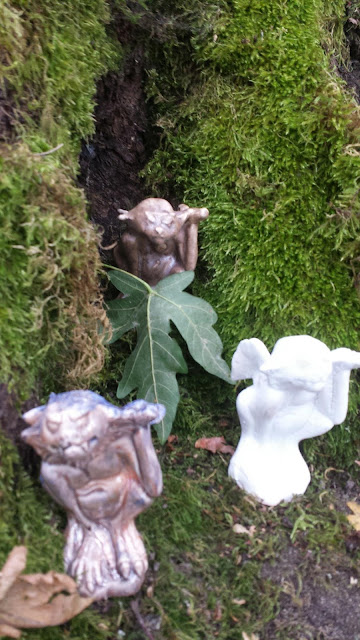 Flying Monkeys, slip cast evil pawns with wings added. Glazed with various low fire glazes. I made these from a mold that was labeled evil pawns that I got out of Charles Krafft's mold shed. I added wings to the back that I either pinched or cut from slabs. The clays used were white low fire casting slip, laguna porcelain,  and an orange earthenware that I collected at a road cut near Vantage, WA. Some of the flying monkeys have metallic glazes and a few were Raku fired. There are over 20 in all. 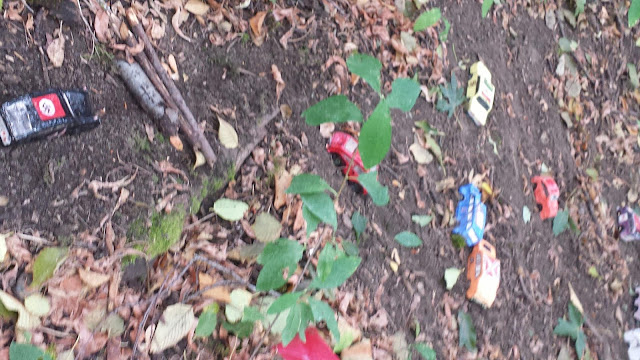 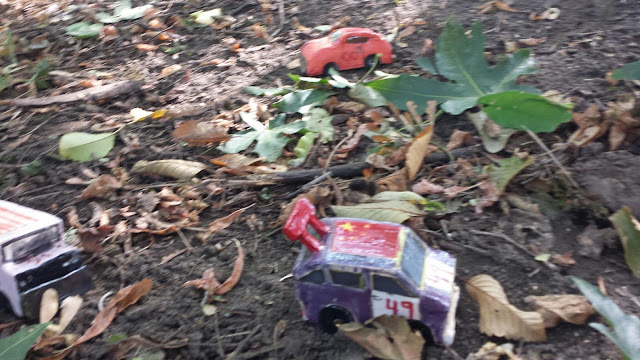 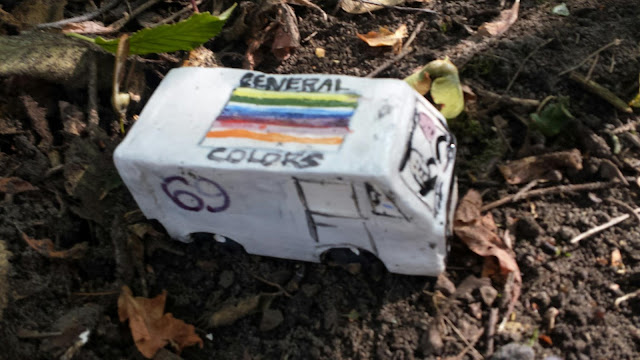 General Colors is the name I derived for the rainbow flag. 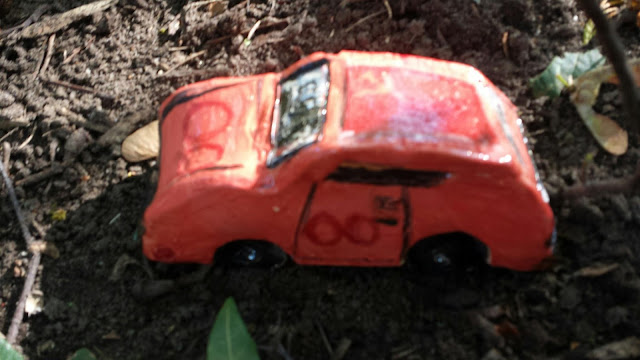 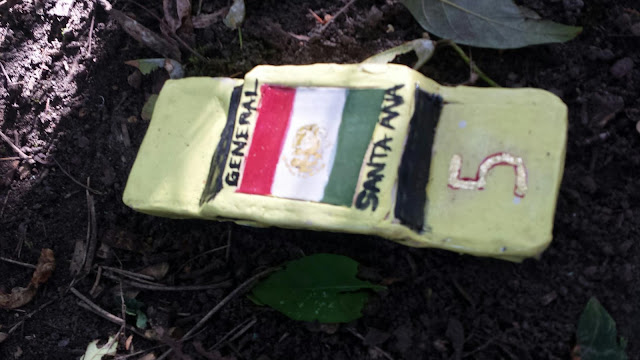 The General Santa Ana,  of Mexico 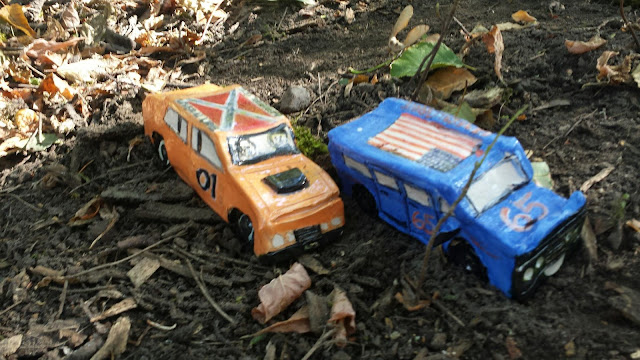 The General Grant, cutting off the General Lee. I recently watched the Dukes of Hazzard again and realized that the message of the show is honesty and standing up to corrupt officials. 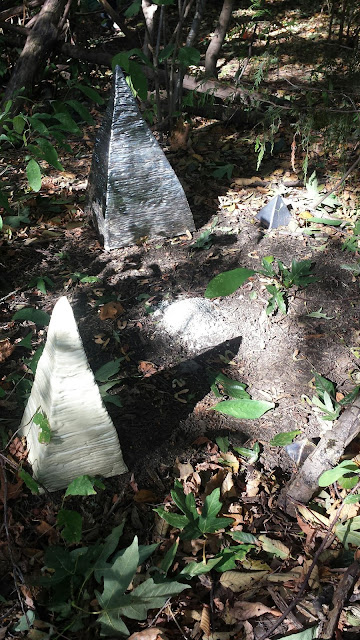 Pyramids, 7 total, representing banking schemes, commodities and civilizations. Arranged in a Hexagram. The center pyramid is made from ceramic shavings and dust.
Posted by Aaron Murray Arts and Crafts at 8:15 PM No comments: