Aaron's Intuitive Garden
At my place of residence on Beacon Hill, I have for 3 years built and maintained a garden that features a variety of edible plants, decorative flowers, and sculptural forms.I had read of the benefits of gardening,of having a relationship with the things we eat, and I took an interest in learning how to grow as many vegetables as taste demanded. Since I am mostly a vegetarian, it was practically a no-brainer and I thought that if I mixed in my art I could create an interesting place to be. A friend of mine had told me that it was easy to turn lawn and weeds into a thriving raised garden bed that could harbor life for birds insects and other creatures. Putting down a layer of cardboard on top of the grass and weeds was often enough to kill them. The roots of these plants leave behind a loosened soil structure capable of supporting deeply rooted vegetables. Our house which sits on a larger tract(lot and 1/2) than most of our neighbors takes a long time to mow and maintain, so the act of putting in the beds also subtracted from time spent mowing. 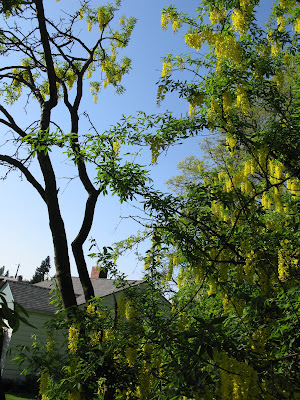 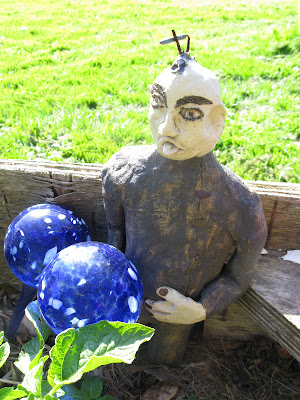 As a sculptor I often look for homes for my unsold sculptures, particularly if they are large. The garden has become a happy home for many of these wayward forms. 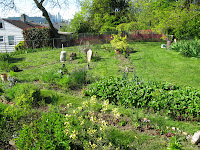 I call this my intuitive garden because of how it has grown. I rarely plan out where I am going to place plants, though I have specifically at times built new beds or added on to an existing one for the purpose of planting a new arrival. The garden expands, as needed, and certain areas are sometime set aside for unknown purposes. In particular many of the varietals have their own space, but more often they co-mingle with other plants in a somewhat random pattern. Therefore someone might wonder why there is cilantro growing in my potatoes, and why the garlic is mixed between beets. 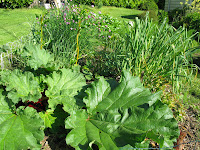 My rows are uneven, not evenly proportioned, and perhaps from an aerial photograph my garden might appear to be symbols from a lost culture. There are weeds. They thrive between the grass and the moss in the lawn. They appear suddenly from compost spread across the beds and after windy days and the rain. The garden never seems perfect and is always in a state of change. I suppose that the continuity of change is perfect in it's own way, just like the universe.
In the garden is the bench from our wedding 10 years ago. 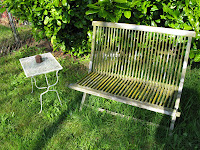 It is teak, though left unfinished and it weathers with moss and lichen in our memorial pet cemetery. Here lies Anna Belle the dog, Zane the turtle, and a pair of nameless rats.They were buried with care, and are now marked with a few sculptural monuments. (lower right) 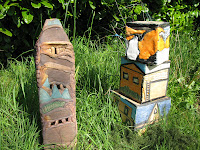 Near the memorial lies the most important part of the garden-- the compost pile! We recycle all food waste which includes lots of peanut shells and coffee grounds. We also pile on grass clippings, pulled weeds, clumps of sodded dirt, and other garden waste. I like to chop it all up every couple of weeks and mix it together, to keep the stuff decomposing and to prevent critters from getting in. I use a hoe and my "army shovel", otherwise known as a trenching tool. 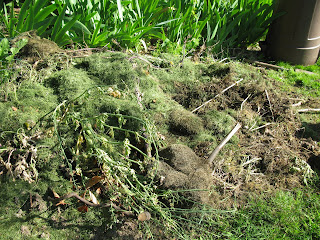 Once the compost has turned brown to black, and acts a little crumbly, I scoop it into a bucket and distribute as needed. I typically cover the entire garden with an inch or two of compost each year. In previous years, I layered and mixed in horse manure with the compost. This year I used seaweed both as a garden amendment and as a compost treatment. Before we moved to this house, the previous tenants had planted flowers and shrubbery around the house and at the borders of the property. Several Honey Locust trees shade the East side of our house with Plum, Oregon Grape, Holly, and Black Locust beside and below. A huge patch of Irises was already there, with Daffodils, Daisies, Lavender, Rhododendron, lilac, and other flowers covering the front entry. My only addition to these are a few Allium and Iris bulbs taken from my grandparents house in Pasco, WA. Though theses Irises haven't yielded any flowers, the Allium have performed well developing lovely purple balls that resemble Dallas Texas's spectacular reunion tower. I have also added a pair of hop plants that are producing more and more buds each year. The Oregon Grape, honey locusts, and other woody plants produce a lot of twigs and sticks throughout the year that they either drop during windy days or are left behind from trimming. 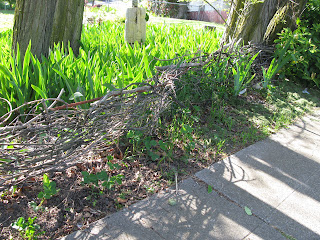 A use I have found for them is to reinforce, decorate, and add character to a standard cheap wire fence. The wires are intertwined with the sticks and branches. They make the fence look stronger and perhaps make it look more formidable against a large stream of strangers that continuously transport themselves along Beacon Avenue. Recently, I surprised a young teenage male after he kicked my fence two or three times in a combative manner. Obviously he was being playful and showing off in front of his school friends. However he was quite taken aback, even apologetic when I yelled "Hey, Don't kick my fence!" The fence suffered little or no damage.
The garden also acts as an chronological exhibition space for my a sculptures as they have evolved in medium and style. Examples of ceramics from early in my career are laid among others of a more recent date. There are examples of works that are found primarily in their own form in nature, stone carvings, wood carvings, and other miscellaneous objects like beach pebbles, broken pottery, and sculptural fragments. There are a few objects that are symbolic tokens from recent journeys. 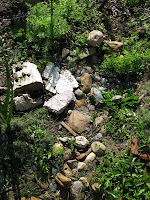 I have an area devoted to woody fungus, shelf and conch. One day a chicken bone appeared, camoflauged almost perfectly with the wood. I think a crow put it there. One of the first things that grew after building my first beds were little orange jelly cups. In another part of the garden on the black locust trees, artist conch appear near some cottage cheesy-looking fungus. I get excited to see these fungi, because I know that these are fruits of a vast mycological network interconnecting life through the soil.                                              On our cement patio is a wooden picnic table. 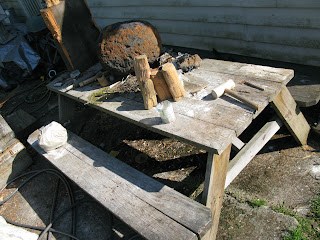 On the table I carve wood and stone, prepare sculptural materials, make ceramics, and sort seeds and plants. It is where I make all my bark, for mulching. Next to it is my bone yard, where rocks I intend to use for carving, and current sculptures unfinished lie piled aside. I have a small cinder block pit, that I have used as a place to fire earthen ware in primitive style. It is covered by two folk art salmon cut from sheet metal that were found in Kittitas County. Next to the patio are the vegetable beds. I grow potatoes in a green plywood box. Next to that I have celery, beets, purple kale, and mint. I have a long row of salad greens next to oregano, fennel, rosemary, and thyme. A large bed of strawberries next to a small batch of leeks. Then blueberry, blackberry, beets, onions, garlic, bell pepper, and rhubarb in a large patch. More potatoes, beets, onions and tomatoes in another row. Kale, garlic,onions attached. Hot peppers and tomatoes at the end. Several tomato rings are independent, some ringed by old bicycle tires. There is a beet and mint patch, with cucumber and squash. And there is even more. This year we even had a surprise visitor in our flower bed, some snow peas.
This garden does attract some wildlife. Squirrels and raccoons visit. I see robins, juncos, wrens, nuthatches, and flickers on a regular basis. A pair of crows has a nest in one of our trees. We see ruby red-throated hummingbirds, little downy woodpeckers, and an occasional purple finch. Many of these birds prefer to forage on and beneath our plants particularly in our aphid infested kale. I've even seen a red tailed hawk which was mercilessly attacked by a gang of crows trying to seek sanctuary in one of our trees. The only owls though, are the ones I've made, and so far they only seem to keep the pigeons away. My intuitive garden offers me a place to escape the stress of life,it is my own private park to reflect on the direction of my life, and it is my home. On the weekends when others are away in search of a special place, I often find it right in my own back yard. 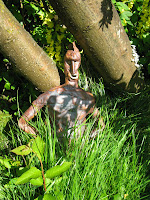 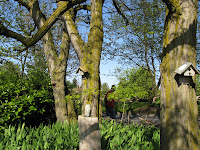 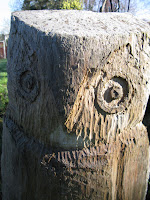 Posted by Aaron Murray Arts and Crafts at 2:49 PM

I've been lucky enuf to partake of your garden and berries, and meet your other-wordly creatures, and not know what will be around the next corner or what will be residing on your picnic table. Thanks for your garden journey. Mary Anne