Woodcuts, Linocuts, and Other Relief 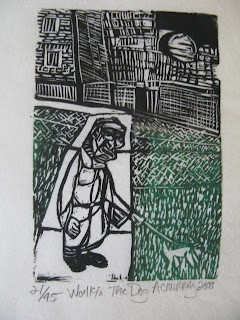 In 1998 I began using soft linoleum to make relief prints.  I soon discovered other carving surfaces such as soft rubber, and then wood.  I've also used styrofoam, craft foam, and other surfaces. 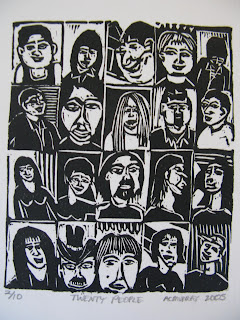 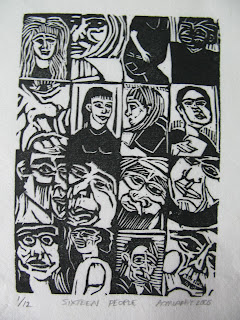 I used to make artist trading cards of people as well.  They were usually painted or drawn, but I also did a series of printed ones as well(see above)  This led to making individual portraits as well (below)

I also began making a lot more of the prints from wood.  I worked at a wine warehouse for awhile and used to collect the wood from wine crates.  It was usually a smooth soft pine.  After pulling out the nails and staples it was ready to carve. 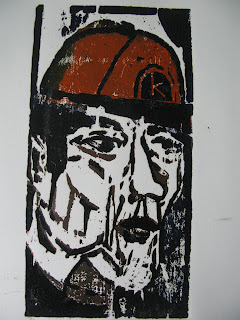 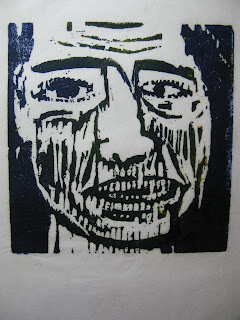 The profiles I made were a reflection on individuals I may or may not have seen previously. In other words I make up these portraits from out of my head.  They are not of a particular person that is really alive, though at times I can see something in them that reminds me of people I have known.  I try to make them look humorous in a way, though other feelings do emerge. 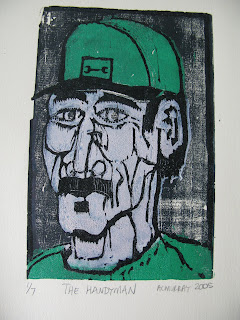 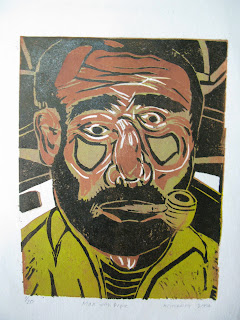 The Man with Pipe is a linocut reduction print , meaning that the soft linoleum is carved, then printed, then carved and printed again, and so on until the block is reduced to small details.  The Handyman is a reduction wood cut.  It is printed from wine crate wood from Australia. 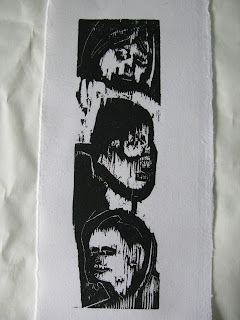 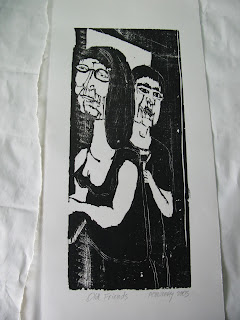 These black and white prints were also done on wine crate wood.  I do not sand or alter the wood before carving.  The wood warps and splits easily so it must be kept dry and flat. 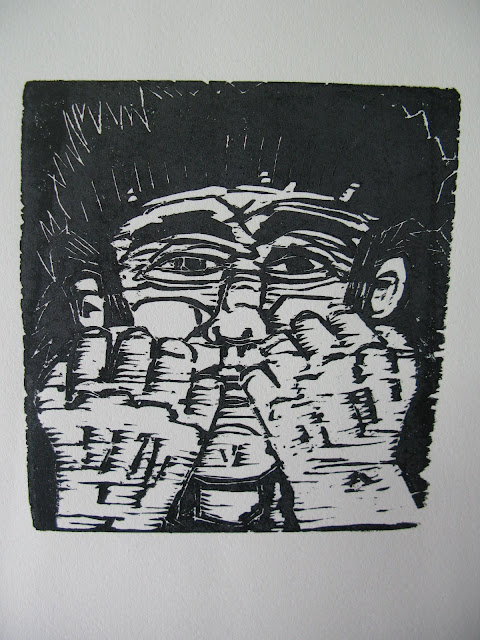 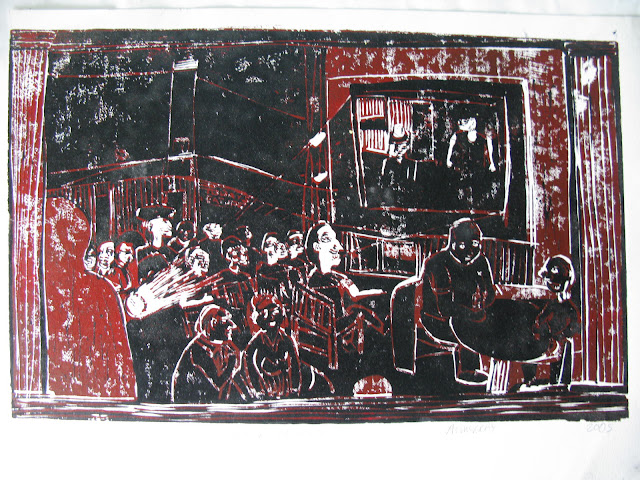 I've also made some prints that were based on local bar scenes.  This print titled Summer Movies is reduction linocut based on the movies they used to show at the back patio of Linda's Tavern on Capitol Hill. 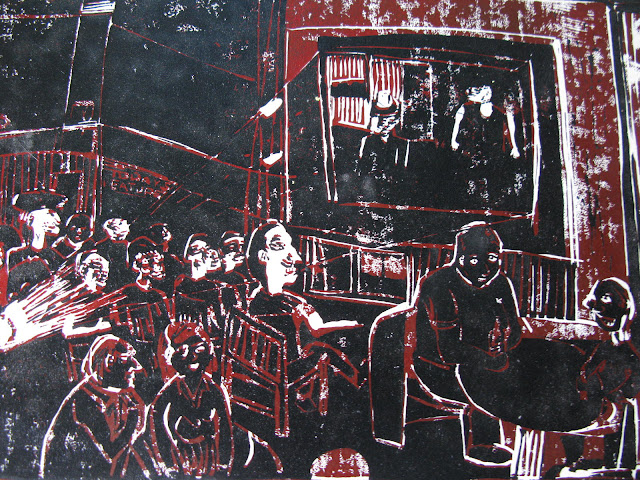 Cityscape Series
Shortly after moving to Seattle in 1998 I began to explore printmaking.  With the encouragement of a friend who lent me the tools and linoleum to make my first print, I soon became obsessed with making relief imagery.  With a new city to explore, I began to take in the sites around me which soon inspired my own artistic vision of archways, stadiums, and viaducts. 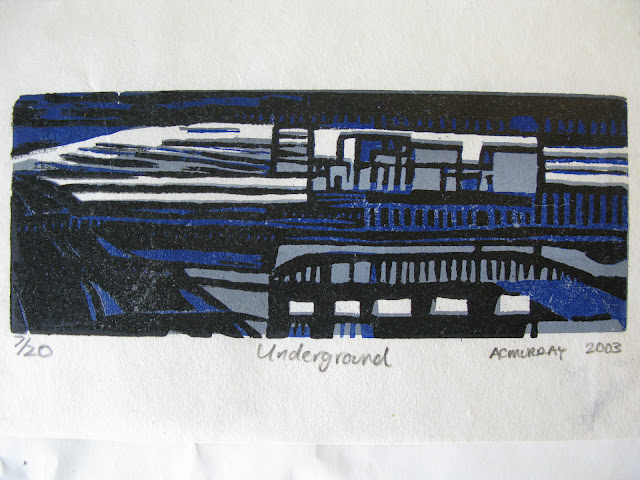 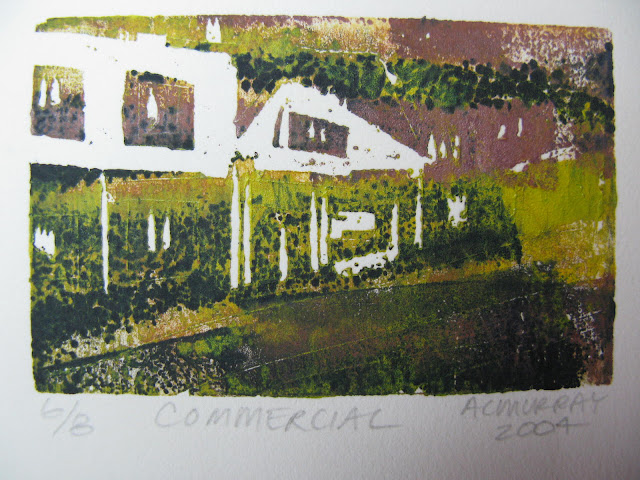 In 2004 I began to apply my ink in different ways to my blocks.  I would roll on multiple colors at a time, layering some, erasing and brushing accents.  At times it became almost like painting. 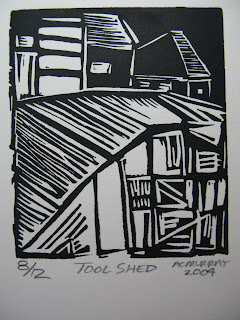 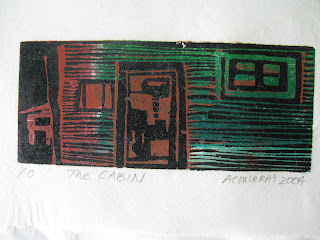 I've always enjoyed the graphic qualities in the relief process. There is a visual play that happens between the positive and negative space. Sometimes a one color, or plain black and white print can be quite effective. 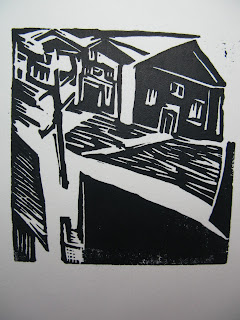 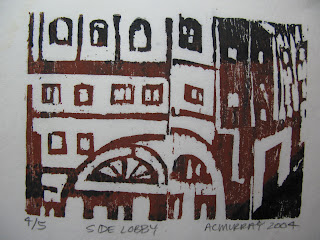 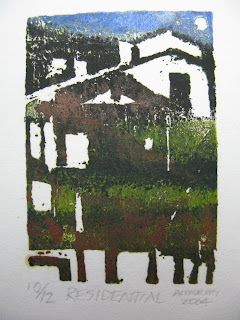 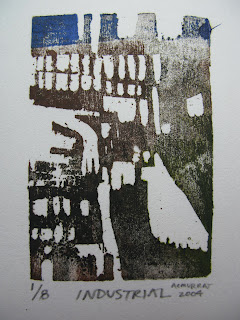 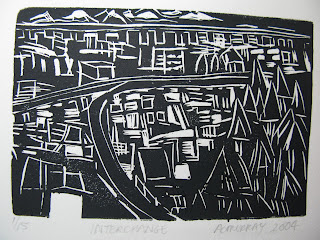 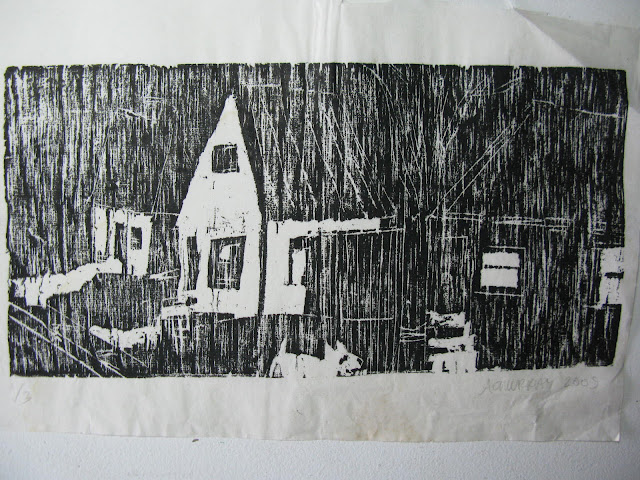 For many of my prints I used discarded wood.  Sometimes the texture of the wood reveals itself in the print(see above) Worn wood can act as a sort of shading device that puts the print in a new light. In 2007 a pipe burst in my basement in the room I used as a print studio.  Many of my prints were destroyed or damaged.  The prints above and below has staining due to the accident. 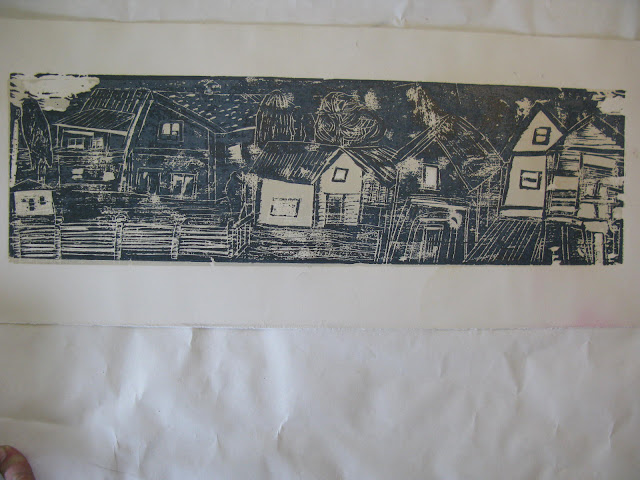 Posted by Aaron Murray Arts and Crafts at 1:02 PM