These are sculptures based roughly on plush animals.  As a child I owned several different animals made from various materials.  These plush toys were often a source of comfort.  As an only child that often spent time alone, these plush friends would often act out scenarios that were important to helping me understand the complexity in the human relationships that I was witnessing on television and in real life.
These sculptures were also made by stuffing various papers inside and in support of various slab and pinched forms.  Their hollow bodies were created by burning out the paper inside.  I used stains, oxides, and under glazes for  coloration, and used glaze as accents on certain attributes.


The Brown Bear and the Cow Boy were both made from a white earthenware body.  I found that at the lower temperatures, some of my stains weren't melting to the desired texture that I was looking for.  So I began constructing the other Stuffs using stoneware.  The stoneware also adds durability to the pieces, as they are fired to a much higher temperature in a gas kiln.

I made these sculptures by using various construction methods.  Most are a combination of slab, extruded, and pinched forms that are assembled by scoring and slipping.  Sometimes I will also use coils as reinforcement and to fill minor gaps.


I used various stain applications on the surface of each sculpture.  I used some commercial Seattle Pottery Supply (SPS) underglazes that fire to cone 10, in addition to rutile, cobalt, and iron stains.  For  a few I mixed together mason stains with some ball clay.

Some of these sculptures were inspired directly by the plush animals I owned as a child.  The bears above and below were attempts to actually reproduce their actual likeness in clay. 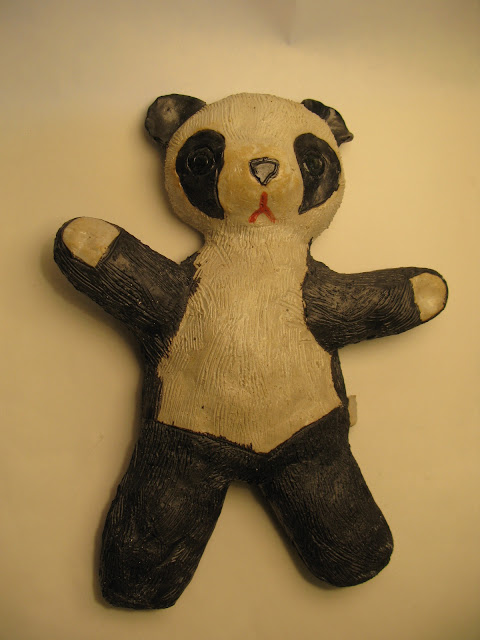 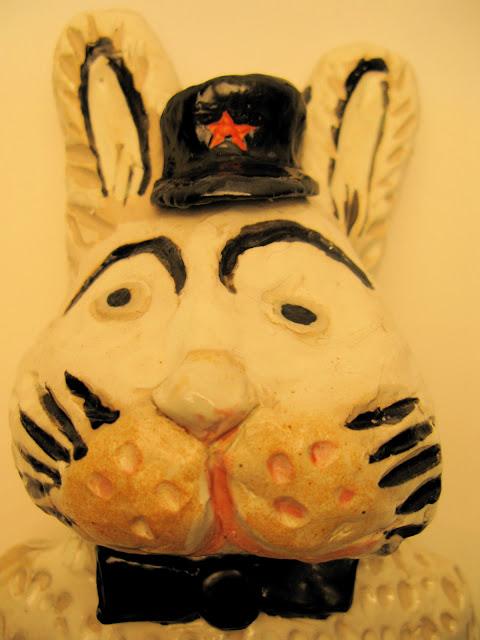 The Gunbunny sculpture was based on a resin Easter magnet that I acquired at a craft store back in the 1990's.  The magnet was slightly different in attire, rather than sporting a bow tie, it had a yellow "ribbon" tied around it's neck. 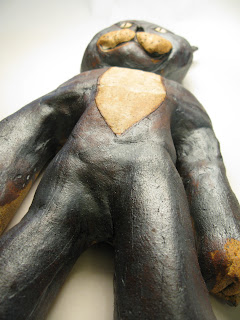 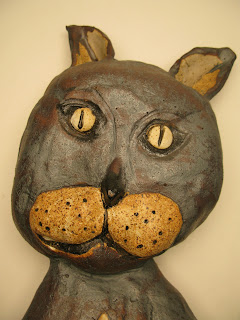 Some of the characters may reflect cartoon characters as well.  Their characteristics give them a personality.  Sometimes I wonder what they would say if they could talk. 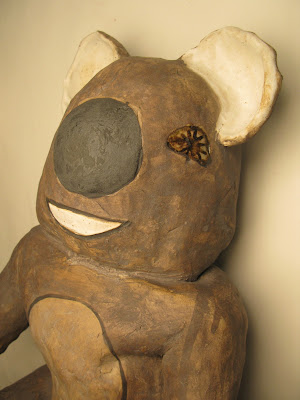 The Koala was solely constructed and assembled from pinched forms.  It is also a reproduction of a plush that I have owned since I was a child.

This series is intended to be shown eventually at a public or private venue.  The "Stuffs" collection will eventually consist of 20 or more forms.  Most of the characters will be wall-mounted, with a few free standing as well.

Posted by Aaron Murray Arts and Crafts at 10:30 AM