The Hermitage at Lewis Park


The Hermitage at Lewis Park was recently part of an interactive art exhibition hosted by the NEPO House on Beacon Hill.  The NEPO hosts an annual exhibition of a wide range of artists engaging the public throughout a 5 kilometer route.  This year was the first year I had applied and was lucky enough to be among the artists selected.  For the exhibition I wanted to create a replica of a lean to structure that I had previously build in the Cheasty Forest, however I also wanted to add other things to encompass the space.  My proposal centered on a forest setting and along the NEPO 5k route sat a slice of forest that was ideal, Lewis Park.  Having previously spent time in that park, I envisioned it as the perfect setting. After meeting with the Friends of Lewis Park, I was given an area to plan and execute my sculpture.  Special thanks goes out to the Friends of Lewis Park, who have labored, cleaned up, re-planted and continue to manage Lewis Park.

Since I am used to spending time alone, particularly in the urban forests, I sometimes try to envision what it would be like to live as a hermit.  I imagine that most things made would serve a purpose for survival. I also think that if time permitted a hermit may create objects that were recreational.  The objects would also be made of local materials, whether natural or reclaimed. As I did research on the life of hermits, I discovered that a hermitage was a place where hermits lived.  This led me to thinking about the Hermitage Art Museum in St Petersburg Russia.
The Hermitage in Russia is known for its collections of primitive to modern antiquities in addition to its modern art collection.  I decided that I could create a version of a "hermitage" that acted like a museum in the forest. By using the theme of the Hermitage's collections, I could create primitive art and an environment that would capture the essence of what it would be like to live as a hermit.

Although Honey Locusts do not grow in Lewis Park, I used them anyways since I have an abundance of them at my house on Beacon Hill. I played around with the idea by laying them in my yard.(see above).   Then the day before the event I picked fresh leaves and brought them down to Lewis Park.

Lewis Park has been an illegal dump site for all kinds of objects. While hiking into the depths of the space I found several items that I used for the art pieces.  Some of them are shown above.

In most of the forests around Beacon Hill there is an abundance of sticks and branches that can be used for all sorts of purposes.  I used sticks to build various ramps laid out in a pattern(above).  My own take on "ramps to nowhere".


I used the larger branches to build a hermit hut (above).  Next to the hermit hut I had a metal box that I shaped out of rusty sheet metal.  The box contained chips gathered from old cedar stumps which were left behind during the turn of the previous century. Beacon Hill was once covered in large red cedars before the loggers and the homesteaders moved in.  As visitors came through the forest I burnt some of the cedar to evoke what someone may have encountered in Lewis Park's past.

I wanted to use these metal stakes that I found in the Cheasty forest by metal detecting.  So I created a low stakes racket that could also serve as a critter trap.  Since I don't eat meat I didn't intend for it to actually capture any critters, but lo and behold a couple of people who brought their dogs were almost in for an unpleasant surprise.
In a nod to the founder of Russia's great Hermitage Museum I made this portrait of Catherine the Great from objects found in Lewis Park. Since the Hermitage has marble busts, portraits, crown jewels, suits of armor, Greek, primitive, and other collections I tried to make work that would fit into those subjects.

The Unicorn Skull was not made of found objects, I made it from clay coils.  I did find the Marble capstone though, in some ivy off Ballard Way.  Perhaps the remains of the last unicorn are to be found within Lewis Park.

Another Bird Head from the primitive art wing of the museum.

For the crown jewel collection I created Twigature.  Twigature are small structures made out of twigs and small tack nails. These structures are meant to be hypothetical structures built as a way to protect and bring attention to the objects inside.  I made 4 of them which represented the crown jewels: ruby, sapphire, and pearls ;plus one attributed to the "crown"

The "crown" contains a brain made out of a found rubber ball, the top of the twigature is a small pine cone to represent the pineal gland or 3rd eye. 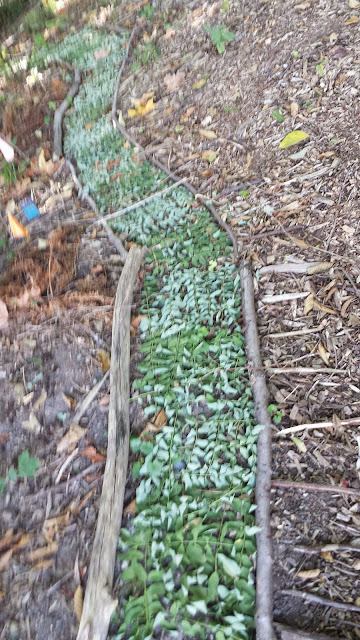 disclaimer:  Some of the photos are blurry, I know.  I took most of them right before the event started with my camera phone.  I am sorry for that.   More images can be found here and here.
Posted by Aaron Murray Arts and Crafts at 2:49 PM