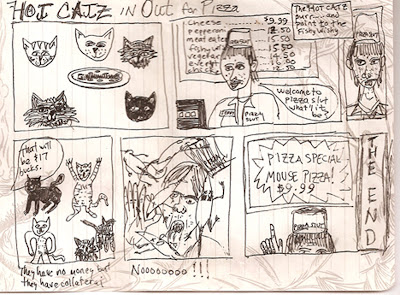 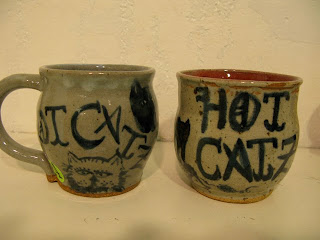 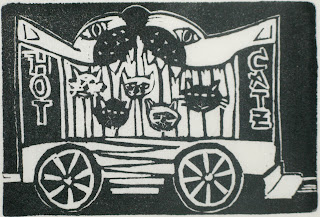 Okay, so I haven't posted for awhile. I kind of took a break for from writing, partially because I have had my mind wrapped around too many things such as thoughts about the future, time and space, art, and wars. Time to return to clear thought--to the here and now.
Lately I've been making and teaching art full-time. In this difficult economy, it is easy to get down about selling my wares and my skills. I find that people can't afford anything these days and are pretty down and out besides. But nevertheless, I am determined to continue on, doing what I love the most.....
........And that is making art.
So lately I have been illustrating a bit. I recently finished an illustration for a magazine in Austin Texas about bartering, and I am working on a series of comics called HOT CATZ. The Hot Catz started as a collaboration between Kate and I when we were waiting to get our dinner at a local eatery. We took turns drawing cats and adding other details until suddenly we had a whole carnival car set up complete with hot cats playthings. Then I took the concept and created a series of Hot Catz dishware such as cups, bowls, ad treat jars. I also did a relief print of the Hot Catz wagon. So lately I've taken it a step further and developed a series of comic strips that I hope will develop into a zine of sorts. (sorry for the blurry pic)
I also just took down a show at the Kirkland Art Center that featured robots, sheeple, and skull cubes-- an extremely political show from many people's perspective. The robots I plan on making larger in hopes that they will debut this summer.
Another show I am part of is at People's Republic of Koffee on Capitol Hill in Seattle. The paintings, part of a CHWS group show , are paintings about Liberty. It might be ironic for some, considering the sign of the PRK features a red star which some have interpreted as Communist(gasp!) I did these paintings as a salute to the USA of old, what was once our republic. I took some of the imagery from 19-20th century images on old whiskey bottles, postage stamps, and post cards and reproduce them via watercolor onto found objects such as rusty tin, road worn aluminum, and old cigar boxes. I will post images soon.
Other things recently worked on or finished: A group of 50 devil figurines, A bunch of cups, and Circus Cars. (Pics coming soon)
Posted by Aaron Murray Arts and Crafts at 12:43 PM